How to Calculate the Screen to Body Ratio of a Mobile Phone ? 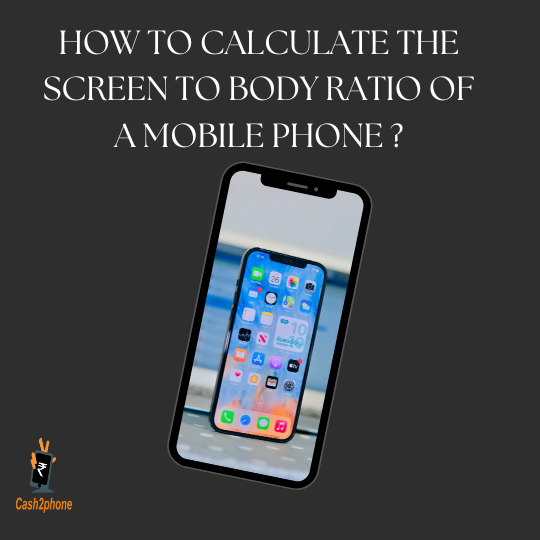 These days bezzle less smartphones are in trend and selfie cameras are being replaced by Punch hole cameras to provide the maximum display to users. Even iPhones are coming with a very small notch to compete with android smartphones. So to provide max screen size in a mobile phone called a screen-to-body ratio in technical terms. The screen-to-body ratio refers to the percentage of the smartphone’s body that is covered by its display. The higher the ratio, the larger the screen. It’s especially important to pay attention to this ratio when buying a large-screen smartphone. It’s important to know how much of the body of a phone is covered by the screen because it affects ergonomics.

In Simple Words, we can say if the Body to screen ratio is 50 percent then 50% area of the front is covered with the phone body and 50% is the screen, in the same manner, if the value is 100 then the screen is 100% screen is available in the front end. There are multiple screen ration available in the market, this depends upon the choice of Mobile phone manufacturers solely. it could be 16:9, 18:9, 19.5:9 and many more. so let’s see how to calculate the screen ratio.

Also Read:- What You Can Do With Your Old iPhone ?

The aspect ratio of a phone’s display is also important to know. Most phones follow the 16:9 standard, which is used for movies and computer displays. This ratio is used for most mobile phones made between 2010 and 2018.

Screen ration is calculated by the proportional relationship between phone width and height. we can say x-axis and y-axis. You must aware of the phone’s Height and width in pixels. this is the pre-requisite for calculating the screen ratio value. the formula will work as

A Smartphone with a smaller screen-to-body ratio may have difficulty reaching the top left corner. While big-screen smartphones have a high screen-to-body ratio, they tend to look premium and delicate. One of the reasons for this is that they are harder to hold. And there is no doubt that everyone wants to see a movie on a big mobile screen and also streaming reels on the big screen is better.

The latest phones with the highest screen-to-body ratios are often more used than those with smaller displays. This makes it more difficult to view content on smartphones that have large displays but a small screen ratio value. It’s important to take into consideration the size of the display and its bezels. You can also sell old phone online at cash2phone for the best price in the industry. Click here to sell old mobile phone

The Best Shareit Alternatives For File Sharing in India

How to Avoid Over Heating of Mobile Phone ?